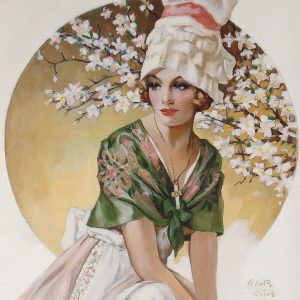 Global Glamour – Typical Beauties on All Our War Fronts A fine surviving cover illustration painting by Henry Clive for the August 27, 1944 edition of “The American Weekly”, a Randolph Hearst publication. Clive enjoyed a three decade long association with this title, he often created serialized successive monthly covers of female heroines throughout history. […] 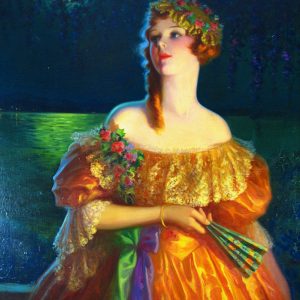 A fabulous large and radiant original oil on canvas by the acclaimed American illustrator Edward Eggleston. This alluring, Edwardian attired glamour girl in luminous moonlight surround was a commissioned calendar artwork under the title The Sweetheart of Sigmi-Chi. Produced in 1919 this same image also appeared (with a riverboat superimposed above the subject’s right shoulder) under the title Dixie. This is one of many instances where an illustrator would reuse a central image to save time while working up a new piece for a competing calendar company. In this instance, Eggleston so seamlessly removed the paddle boat from the original artwork I wouldn’t have known it existed in that form if not for the image shown in Norm Platnick’s A Lady of Mystery: A Collector’s guide to Edward Eggleston.

Demure Woman in Straw Bonnet by J. Knowles Hare This is a large, early 1900s pastel illustration by John Knowles Hare that was created for the calendar market during the Edwardian era. In this portrait, a demure brown-eyed lass gazes out towards the viewer from underneath a stylish, wide-brimmed straw bonnet with flowers. This lovely […]

Calendar art by Philip Boileau By the time Philip Boileau created this pastel on board calendar illustration, he was already one of the most popular “pretty girl” postcard artists working. This example, which was copyrighted under the title Lady In Blue features a blue-eyed Edwardian maiden looking over her shoulder daringly at the viewer, and is […]

Neysa McMein advertisement for Wallace Silver This stunning and expertly rendered pastel by Jazz Age illustrator Neysa McMein appeared as advertising for the R. Wallace & Sons Mfg. Co.’s line of silver plate.  Connecting the elegance of McMein’s flapper beauty to the idealized “perfect hostess”, this provides a wonderful window into what was considered “the […]

Albert Neville’s Flapper Girls This opulent and provocative pastel on board is one of the many art deco glamour girl illustrations Albert Neville created during his career as a movie magazine cover artist, and freelance calendar illustrator. Heavily inspired by the floating head flapper girls Rolf Armstrong specialized in during the 1920s, this shows a […]

Under the Mistletoe – A Christmas Cover Girl