Grapefruit Moon Gallery is honored to offer the poignant, decorative “They Shall Obtain Mercy,” a large and important gouache with room-commanding presence which served as preparation for one of 11 allegorical murals Eugene Savage created for The Elks Veteran Memorial in Chicago’s Lincoln Park neighborhood. The works are still on display at this landmark destination. This deeply moving and symbolic artwork reflects on the hardships and loss of World War I and is beautifully matted and framed. Above: Detail of wall mural on display in Lincoln Park Chicago

The first American impulse at the outbreak of the war was in answering the appeal of the suffering and protecting the ruthless disregard of the innocent. In this painting they bring aid and comfort to the refugees amid ruined houses. Columbia, her sword still sheathed, opposes the brutality with an appeal and threat of moral suasion.

The Elks Veterans Memorial and Headquarters Building has been a Chicago landmark since its dedication on July 14, 1926. Designed by New York architect Egerton Swarthout, it’s considered by many experts to be the finest of its kind in the world. Sculptures are by three of the greatest artists of their day, Adolph A. Weinman, James Earle Fraser and Fraser’s wife, Laura Gardin Fraser. The allegorical murals are by Edwin H. Blashfield and Eugene Savage. 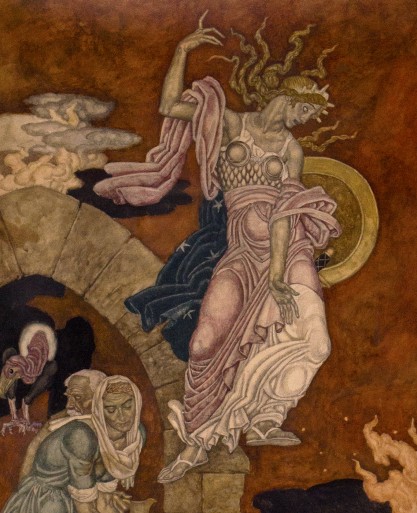 A link to Eugene Savage’s Elks Club art including the larger displayed “They Shall Obtain Mercy” mural presentation of this important artwork.

Savage is best remembered today for a series of murals commissioned by the Matson Shipping Line and completed around 1940. His inventive images were also used on numerous cruise ship menu covers. For this commission, Savage engaged in exacting studies of customs and folkways of the Hawaiian natives. His cruise ship art is highly regarded and collected today for its cultural accuracy and aesthetic beauty.

Eugene Francis Savage was born in Covington, Indiana 1883. He underwent various forms of art training in the early years. He was a pupil of The Corcoran Gallery and The Art Institute of Chicago, and was later awarded a fellowship to study in Rome at The American Academy.

While under the spell of that ancient city the young artist began to render historic figures that were suitable for the classic style needed for mural painting in the traditional manor. During this period he was able to study and observe Roman and Greek sculpture, although much of the academic training was accomplished by using plaster casts along with the incorporation of live models. This method survived and was used efficiently throughout Europe and the United States. There are many monumental bronze statuary works by Savage in American east coast cities including this work in Grand Army Plaza Brooklyn, New York.

After leaving the Academy, Savage was commissioned to paint numerous murals throughout the United States and Europe. This artist received acclaim for the works he produced while under commissions from various sources. This young master was a contemporary of Mexican muralists David Alfaro Siqueiros (1896-1974), Jose Clemente Orozco (1883-1949) and Diego Rivera (1886-1957). In this period he was to show the influence of his contemporaries in formulating a modern style. Savage also played a vital role in the WPA Federal Art program, and he was a member of The Mural Art Guild.

Savage was elected an associate member of The National Academy of Design in 1924 and a full member in 1926. From 1947, he held a professorship at Yale University where he taught mural painting, and some of his students went on to significant positions.

By this time the artist had painted large-scale murals at Columbia, Yale University, Buffalo N.Y., Dallas, Texas, Chicago, Indiana, along with other commissioned works. He also achieved recognition for a series of murals commissioned by the Matson Shipping Line and completed around 1940. However, the award-winning murals were not installed as planned but were put in storage during the war years when the ships were used for troop transportation and were in danger of attack.

However the mural images were reproduced and distributed by the shipping company including nine of the mural scenes that were made into lithographed menu covers in 1948. The American Institute of Graphic Arts awarded certificates of excellence for their graphic production, and the Smithsonian Institute exhibited the works in 1949. Today Savages’ Hawaiian Art production is held in high regard by collectors of Hawaiian nostalgia.

In later years the artist focused his attention on a theme that dealt with the customs and tribal traditions of the Seminole Indians of Florida. He produced many variations of this theme throughout his lifetime, and the pictures were usually modest scale easel paintings, precise and carefully delineated. Many of these pictures incorporate surrealistic elements and show some minor stylistic influences of the painters Kay Sage (1886-1957) and Yves Tanguy (1900-1955). Many of Savages’ artistic portrayals of Seminole culture could be considered dreamscapes with models and elements are often composed in a stage-like setting.

Eugene Savage spent his remaining years in Woodbury, Connecticut, and he died peacefully in 1978.

They Shall Obtain Mercy