An allegorical angelic scene by noted American fine artist, muralist, and illustrator Charles Allen Winter titled “Liberty Unchained.” Our research leads us to believe this was an interior magazine illustration for Cosmopolitan, which ran a series of spiritually relevant writings by Roycroft founder and early twentieth century philosopher Elbert Hubbard under the title “Little Sermons”–all illustrated by Winter. Several of Winter’s “Sermons” paintings were then reproduced in Hubbard’s own publication “The Fra.” From the estate of Charles Martignette, the sadly departed author of the “The Great American Pin-Up.” 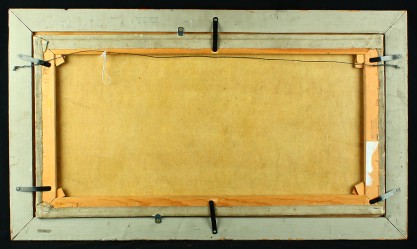 Charles Allan Winter (while the artist used the Allan spelling for his middle name, he is more commonly known as Charles Allen Winter) was born in Cincinnati, Ohio, October 1869. His father, Alfred Allan Winter, came to the United States from England at the age of three years. His mother, Fannie Amelia (Ramsley) Winter, was born in Piermont, New York. The Ramsley family was among the earliest settlers of Newark, New Jersey. Four children were born to the couple, Charles was their first.

While he was an infant, the Winter family moved to Dayton, Kentucky, a suburb of Cincinnati. Charles attended public school until the age of 12 years. After leaving school he was employed by a cousin, John Ramsley who conducted a confectionary establishment in Cincinnati. At the age of 15 he entered the Cincinnati Art Academy as a student, mornings only, continuing to work afternoons at Ramsley’s. He was able to attend the art academy only part time, some of the time the night session only, for seven years or until he was 22. The next two years he attended both the day and night sessions. His teachers included Vincent Nowottny, Lewis Lutz, and Thomas S. Noble.

In 1894 Charles won a foreign scholarship competition given by the art academy with which he traveled abroad for three years in Paris, France. Tuition and all personal expenses were covered by the scholarship. At the Académie Julian he studied under Adolphe-William Bouguereau and Gabriel Ferrier. He spent eight months of the three year scholarship in Rome, Italy.

At the completion of the three years, Charles prolonged his stay in Europe until he received an invitation to teach a portrait class at the St. Louis School of Fine Art, Missouri, where he remained for three years.

Charles was an illustrator and landscape and marine painter who used bright colors and impressionist style. He painted at Gloucester, Massachusetts and St. Louis, Missouri and exhibited at the Paris Salon and the Art Institute of Chicago. His illustrations were published in magazines such as Collier’s, Cosmopolitan, Hearst’s magazines, and The Masses.