A lyrical American impressionist oil painting by Charles Allan Winter, one of our favorite 20th century fine artists and illustrators. This is a large and important work with two demure art nouveau maidens in a lush and colorful stylized fantasy landscape. Verso retains original exhibition card and title of “Music.” Housed in a wide profile hand carved Paul Carter Goodnow American Arts & Crafts frame, a defining example from the Charles Martignette collection.Winter is remembered for his work with Elbert Hubbard Roycrofter’s movement. Illustrating many of Hubbard’s ‘Little Sermons’ in Cosmopolitan magazine, the artist also worked frequently for The Fra Magazine. His style and aesthetic was recognized by proponents of the Arts & Crafts movement for its refined and harmonious beauty. This would be a great fit in an American Arts & Crafts/Bungalow environment.Charles Allan Winter was born in Cincinnati, Ohio, October 1869. His father, Alfred Allan Winter, came to the United States from England at the age of three years. His mother, Fannie Amelia (Ramsley) Winter, was born in Piermont, New York. The Ramsley family was among the earliest settlers of Newark, New Jersey. Four children were born to the couple, Charles was their first.While he was an infant, the Winter family moved to Dayton, Kentucky, a suburb of Cincinnati. Charles attended public school until the age of 12 years. After leaving school he was employed by a cousin, John Ramsley who conducted a confectionary establishment in Cincinnati. At the age of 15 he entered the Cincinnati Art Academy as a student, mornings only, continuing to work afternoons at Ramsley’s. He was able to attend the art academy only part time, some of the time the night session only, for seven years or until he was 22. The next two years he attended both the day and night sessions. His teachers included Vincent Nowottny, Lewis Lutz, and Thomas S. Noble.In 1894 Charles won a foreign scholarship competition given by the art academy with which he traveled abroad for three years in Paris, France. Tuition and all personal expenses were covered by the scholarship. At the Academie Julian he studied under Adolphe-William Bouguereau and Gabriel Ferrier. He spent eight months of the three year scholarship in Rome, Italy.At the completion of the three years, Charles prolonged his stay in Europe until he received an invitation to teach a portrait class at the St. Louis School of Fine Art, Missouri, where he remained for three years.In 1901 Charles moved to New York and took a studio at 8 East 59th Street, where he lived when he married the artist Alice Mary Beach on January 1, 1904.Charles was an illustrator and landscape and marine painter who used bright colors and impressionist style. He painted at Gloucester, Massachusetts and St. Louis, Missouri and exhibited at the Paris Salon and the Art Institute of Chicago. His illustrations were published in magazines such as Collier’s, The Fra, Cosmopolitan, Hearst’s, Shadowland and The Masses.

Above: 1920s exhibition label and title of “Music” on back stretcher 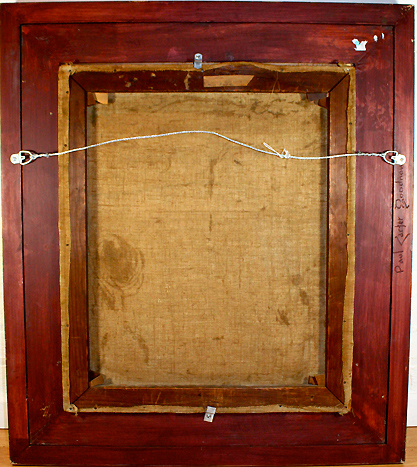 Above: Verso view of untouched canvas and stretchers