Carmen, painted in 1929, is one of four monumental and epic, larger than life oil paintings created by Rolf Armstrong after his return from a yearlong excursion to Paris, where the artist was inspired by the fine art salon movement nudes which were on display in museums, galleries, and private homes throughout France. Known as the Paris Nudes, these works featured exotic seductresses, culled from history and mythology, and rank among the finest works Armstrong created during his long illustrious career. Taking its name from title character from Georges Bizet’s opera Carmen; this large oil on stretched canvas published painting envisions the fiery gypsy dancer in all of her seductive allure. The Paris Nudes were rediscovered in the 1980s, in the attic of a friend of the artist. While the other three works (The Enchantress, The Song Of India and Arabian Nights) have all sold at auction in the past 15 years, Carmen has remained in private hands.

During a prolific and storied career, Armstrong became known as one of the most revered pin up illustrators of the 20th century, a reputation that was cemented with his induction into the Society Of Illustrators Hall of fame this year. The induction essay, which appears in the SOI Annual 2016, was written by gallery co-owner Sarahjane Blum, and can be found online here.

Carmen was published as a Brown & Bigelow Calendar in 1929, the verso stretcher bar still bears the original company filing inventory label. This work, along with the other Paris nudes were pivotal in helping Armstrong rebrand himself as an in demand calendar pin up illustrator, their impact was immediate in this transition.

Along with its calendar use, this artwork appeared on a 1930s condom wrap and tin, for “Carmen Brand” latex condoms. A published vintage print and a condom wrap and condom are included in the sale.

Included below is an informal image of Carmen as it currently hangs in its temporary home in downtown Minneapolis. Also included for scale is the diminutive Ms. Blum, dwarfed by this epic published important oil on canvas masterpiece. Painting has been handsomely framed and will be professionally crated and shipped inclusive in the sale price. Carmen is featured in the recent Taschen book The Art Of Pin-Up, as a full page color plate (page 113), accompanying a biography of the artist written by gallery co-owner Sarahjane Blum. 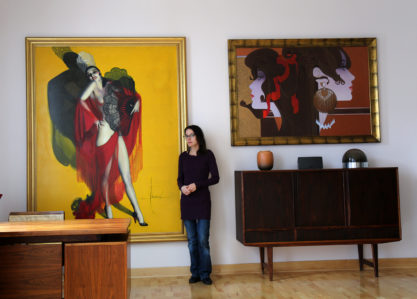