This rare surviving original oil on canvas by H.J. Ward was created for the September, 1938 edition of Romantic Western. Only in the upside down, just plain evil world of the pulps would such a lurid and unchivalrous ultra-violent depiction exist on the same playing field with the word romantic. Painted with enough action to capture the attention of a passerby at an urban street newsstand and enough ambiguity and menace to get him to reach for the change in his pockets. Loosely based on the interior story Devil’s Fishbowl by E. Hoffman Price.
In this spotlight enhanced dramatic frontier justice confrontation, a square jawed cowboy has just delivered the final blow to a scantily clad pin-up girl cowgirl, who was clearly up to no good–the still smoking gun is seen falling listlessly from her limp right hand. A fresh to the market recent estate find that is in all aspects just a knockout. We acquired this painting in December of 2014 and posted it to our website at that time, it sold the first day listed and we had been awaiting to finalize the purchase with that buyer – which as of yesterday fell through.

Hugh J. Ward is now the stuff of legends, a well written and researched monograph by our colleague David Saunders on the artist has recently been released by The Illustrated Press. A color plate of this image as it appeared on the cover of Romantic Western is pictured on page 100 in that volume, the book and image specifically are shown below. 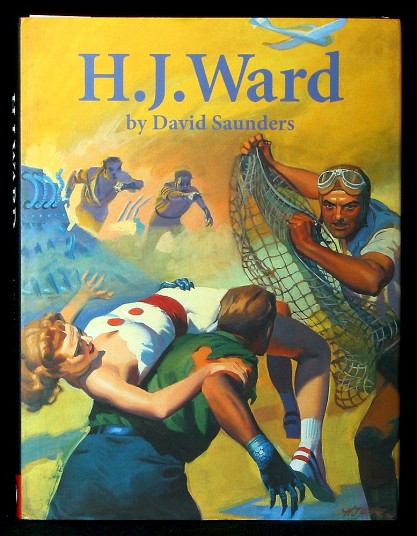 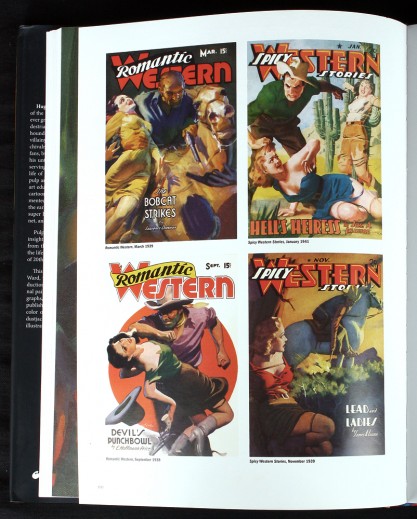 A biography of the artist by David Saunders:
Hugh Joseph Ward was born March 8, 1909 in Philadelphia, PA. His parents were Mary and Charles A. Ward. His father worked for the city as a letter carrier. Hugh was the youngest of six children in an Irish Catholic family. There were five sons and one daughter. Two other children were also born, but they died in infancy. The family lived at 1922 South 11th Street in Philadelphia for ten years but in 1919, when the father was hired as a stevedore at a shipping company, they moved to 2036 13th Street. “Hughie” had four years of Parochial high school.

Hugh Ward had met a typist named Viola Conley at a Philadelphia publishing company. Her parents were Irish and German and she had been raised in a German neighborhood in North Philadelphia. Viola was one year younger than Hugh.

In 1931 at age twenty-two he began to travel by train to New York City in order to visit any pulp publishers who would take the time to look at his portfolio of prospective paintings for western magazines. He soon made his first sale to Wild West Stories and Complete Novel Magazine. Sensational pulp covers by H.J. Ward were soon appearing on Ace-High Western, Argosy, Double Detective, Easy Money, Prison Life Stories, Rangeland Love, Red Star Detective, and Red Star Mystery.

Hugh and Viola married in August of 1934, and the following year their daughter, Patricia, was born. Ward’s art studio was a modest room in his home.

In 1941 H. J. Ward prepared a portfolio of prospective illustrations to show to art editors in a concerted effort to find work in advertising and slick magazines.

Ward was inducted into the Army on April 13, 1944. He was recorded at induction to be tall, thin, with dark hair, and a heavy smoker.

Soon after enlistment, Ward began to experience problems with his shoulder. Medical examination determined that he had a cancerous tumor in his lung.