Grapefruit Moon Gallery is delighted to offer the original 1941 lurid gouache painting by Bill Fleming which appeared as the cover for the early Dell Vest Pocket Paperback book Marihuana, written by Cornell Woolrich under the pen name of William Irish. The cover slug says it all- “A Cheap and evil girl sets a hopped up killer against the city…”.

Painting is unsigned, the title page of the published paperback lists Bill Fleming as the cover artist. A first edition copy is included with sale. This original illustration is a clever composite work, comprised of three individually painted, dramatically rendered gouache paintings – the joint, the hopped up killer and the evil girl, all laid down on the same illustration board seamlessly to create the finished cover illustration, the technique creates a heightened sense of drama and dramatic depth. 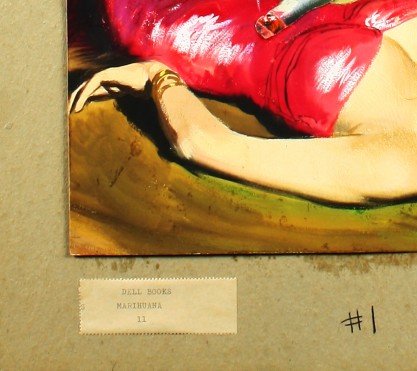 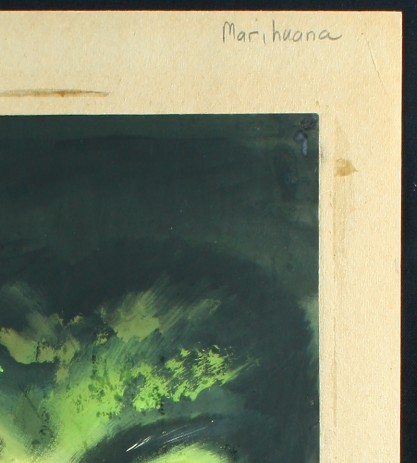 One of the fascinating aspects of this work is its very early publication date of 1941, a full decade before America’s book stands were inundated with lurid paperback covers extolling the danger of drugs and lustful youth culture. It also evokes the wages of sin world of the film noir bad girl, the haunted man’s face in the background suggests psychological torment. Perhaps the most iconic paperback cover painting ever offered for sale. Painting is in a fine state of original conservation and is handsomely framed and matted under glass, a fine condition copy of the Dell Book accompanies the painting.