Alien Culture, Cosmag, The Mutant, Spaceteer, Star Western, Martian News Letter; what do all these things have in common? All have fantastical names that thrust your mind into adventurous flights of fancy, and all belong to the 1940s subculture of science fiction fandom. They also all feature the work of the prolific, obscure, and intriguing California artist and science fiction fanzine illustrator John Cockroft. Recently, Grapefruit Moon Gallery has acquired four original fanzine ilustrations by Cockroft, sparking a search for more information about the artist, and a look into the world of fandom in the post-World War II era.

The origins of sci-fi fandom are generally credited to the 1920’s Hugo Gernsback science fiction pulps. In Amazing Stories, Gersback opened up an interactive space where readers could engage with one another and with the writers and artists whose work could be found in the commercial pulps of the day. Collaborative efforts within the science fiction community quickly grew, with clubs sprouting up in towns across the US and Canada, and home mimeographed “fanzines” circulating. By the 1940s, the subculture was so robust that soon-to-be luminaries in the community Don Wolheim & Forest Ackerman (among others) got together a primer zine “What is Science Fiction Fandom?” inviting readers to find their own place within it. 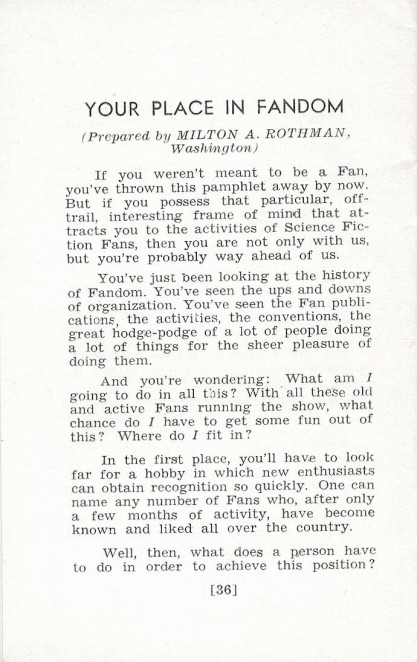 John Cockroft did just that, working with fellow enthusiasts across the country, mailing art and ideas back and forth, his work stands today as a testament to that exciting period. Lee Strieff, whose brother James and friends wrote of the “epic of the Martian Empire,” remembers Cockroft as “a science-fiction/fantasy fan who was a veteran and drew clever illustrations of fanciful beings and landscapes. He had a color ditto machine and published his own fanzine as well as doing work for others….”

We are thrilled to offer this peek into the past through the lens of 1940s fandom and to have four original, fresh to the market illustrations by Cockroft at the San Diego Comic-Con. Stop by booth 4205/4207 to see them in person, or just to say hi. For more on the fascinating history of 1940s fandom, definitely check out All Our Yesterdays available as a PDF here.