Evoking Little Red Riding Hood with an ominous mood and maiden in brightly colored cape, this art nouveau winter-scape shows a determined maiden walking through a snow covered forest, a masterful example from belle époque artist extraordinaire Louis Rhead. Though Rhead, like many of the popular illustrators of the period, did illustrate a version of the Grimm’s Fairy Tale, this is not in fact a scene from the story. He interpreted Red Riding Hood traditionally as a cherubic child, rather than the young woman seen in this stunning watercolor. We have not as of yet identified the exact usage of this piece, though it was likely created as a magazine cover or  seasonal poster design. The work is matted and framed behind glass in an ornate period antique frame, and signed lower right.
This is a rare surviving original from this important print maker, fine artist, illustrator, and poster master. Rhead’s work appeared alongside Alphonse Mucha, Jules Cheret, and Toulouse Latrec pieces in Les Maîtres de l’Affiche (Masters of Posters) folios at the turn of the last century.

John Louis Rhead was a noted illustrator during the Golden Age of Illustration. Born into a family of well-known English artists, Louis Rhead was sent to Paris at the age of thirteen to study under Boulanger. Returning to England several years later, he continued his studies under Edward Pointer and Alphonse Legros. He later emigrated to New York where he spent most of his career. There he was a member of the Architectural League, and the New York Watercolor Society. He also exhibited work at the Paris Salon.

When Rhead visited Paris in his formative years he became good friends with Eugene Grasset, the famous French Art Nouveau master, and was deeply influenced by him. Along with Will Bradley and Edward Penfield, Louis Rhead was in the forefront of the American Art Nuveau movement. Rhead created lithographic posters for both Century and Scribner’s. Rhead also was honored with one-man exhibitions of his work in France, England and the United States.

Though best known for his illustration art and fine-art paintings, Rhead also was proficient in etching and ceramic design. A broad thinker, he even manufactured fly fishing lures, which are hotly collected today. He and his equally talented brother, George Wooliscroft Rhead, collaborated on editions of Bunyan’s Pilgrim’s Progress and Tennyson’s Idylls of the King. Among the many books Louis Rhead illustrated are Swiss Family Robinson, Gulliver’s Travels and Treasure Island. Although Rhead illustrated many children’s books and novels, he is most beloved as a master of design. His striking work was often based on daring colour schemes, flat tints and few lines, which he managed to combine with surprising harmony. Rhead’s original paintings are very scarce and his original posters, like all the work of the best Art Nouveau artists including Alphonse Mucha, command great attention to this day.

Below are a few other examples of Louis Rhead cover and poster designs and book illustrations, in a Belle-Epoque, Alphonse Mucha stylized Art Nouveau aesthetic. Original pen & ink works and watercolors by this artist are very scarce. 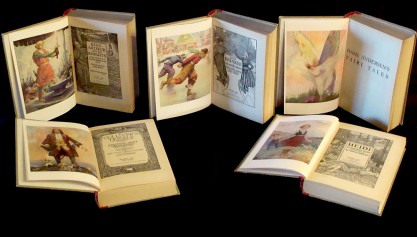 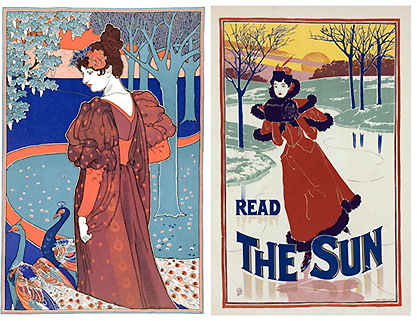