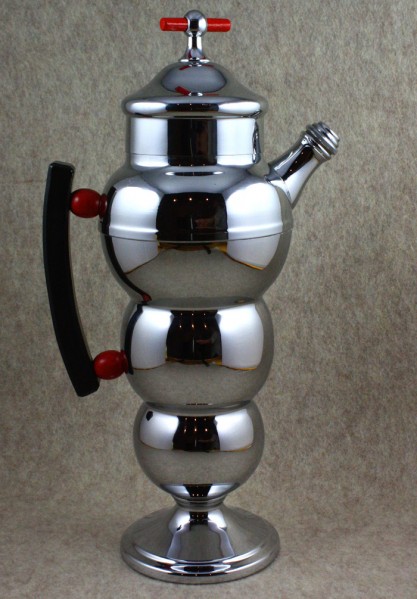 A history of the cocktail and their shakers in American society. Though Happy Hour had existed since the turn of the century, when 5 pm ‘tea-time’ was usurped by cocktails, the sacrifice of World War I led to a post-war pleasure seeking public who wanted nothing more than excess and forgetting. Lethe was found in the glimmering silver martini shakers of high society and the nickel-plated barware of the working class.

1920 saw a change in the process off consumption, when the Eighteenth Amendment mandated Prohibition in the United States. Though frequently critiqued for unfair class stratification, speakeasy doors where theoretically open to anyone with the right password and this outlaw culture had a powerful pull, drawing in even those who had never tasted a cocktail before. Libations liberated some gender restrictions as well, voting rights coupled with sexual licenses and a rejection of feminine dress à la Clara Bow engendered the modern flapper sophisticate, in one hand a cigarette in the other the newest mixed drink. Prohibition bars needed appropriate accoutrements to serve up the latest craze, cocktails that stretched out the supply of illicit alcohol and disguised the often unpalatable taste of bootleg gin. Thus the jazz age shakers were born, silver roosters, geometric chrome edifices, and novelty automobiles that delivered such aptly named drinks as ‘Between the Sheets’ and ‘The Bee’s Knees.’

The Repeal of Prohibition in 1933, coupled with the Great Depression, led to an explosion of cocktail popularity. Far from the excess born out of wartime deprivation of the 1920s, the 1930s reversed the order. But the one thing Americans tried to hold onto was their booze, and the repeal made scoring alcohol even easier during the economic hardships. In conjunction with alcohol, movies were a way to escape the reality of the Depression and dust bowl America, a few hours to keep minds off their woeful reality. Stars of the silver screen sang, danced, and drank their way through the script, cocktails de rigueur for escapist fantasy. The desire to parody movie stars in turn led to an even greater demand for shakers, and the machine age leapt to meet demand, producing beautiful art deco skyscraper pieces out of Bakelite and chrome. By the end of the decade, the cocktail shaker has become a basic of the American household.

A history of the cocktail shaker, just in time for New Year’s