We are thrilled to announce the discovery of several original pin up paintings from the Louis F. Dow calendar company of Saint Paul, Minnesota, never before offered to the public. “A Hitch in Time,” “High and Dry,” and “Foil Proof” from Gil Elvgren and Charles Showalter are unparalleled examples of original early 1940s calendar art, beauties that ached to be found. Before moving to Brown & Bigelow, Gil Elvgren developed his unmistakable “Elvgren girl” at Louis F. Dow with pin up images that could be seen everywhere from the walls of machine shops to the bunks of GIs overseas. Both “A Hitch in Time” and “Foil Proof” were printed in the Louis F Dow “morale boosting” V-Mail collections that were sent to the troops during World War II and as such, left an enduring impression on an entire generation of young men. While at Louis F Dow Elvgren influenced pin up itself, with artists such as Showalter (“High and Dry”) executing calendar girl images for Dow in the Elvgren manner. Few of these early Elvgren original works survived, which makes these recently discovered “lost girls” all the more alluring. 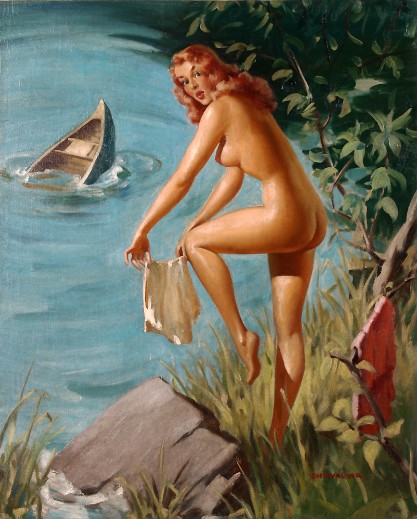 Please check out these rare beauties and their amusing antics. We have also listed several other newly acquired pin up originals from Earl Moran and Harry Ekman.