This remarkable image features a nude reclining maiden by one of our favorite Golden Age illustrators W.T. Benda. A dazzling composition, an intricate and technically adept graphite drawing with silver glittery paint highlighting the subject’s hair and face. Signed lower right and beautifully framed and silk matted behind glass in a hand carved gold leafed basswood museum quality frame. This does not appear to be a preliminary work and was likely created as fine art–the detail, particularly on the face, is extraordinary.

Benda was educated in Kraków and Vienna. He emigrated to the United States in 1899 and became a U.S. citizen in 1911.

Benda’s exotic “Golden Beauty” Benda Girl illustrations often appeared in Life, Vanity Fair, and Vogue magazines. In addition to being an illustrator, he was also an accomplished mask-maker. Working in papiér-mâche, Benda’s masks ranged from startlingly lifelike to comically grotesque. His book on the subject, simply titled Masks, was published in the early 1940s. 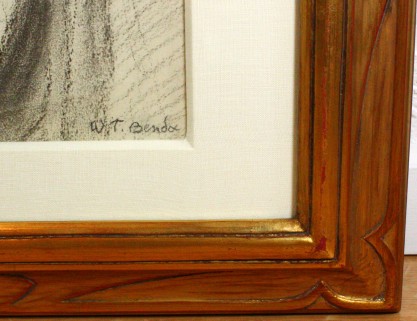