A fabulous c. 1940s original pin up pastel by Earl Moran created for the Brown & Bigelow Calendar Company of Saint Paul, MN. In this electric large format illustration, a smiling and flirtatious chamber maid in a sheer pink nightie is clearly on a mission to create mischief – with candlestick in hand as she prepares for an evening soiree. The fade-away modernist approach to the stairway is pure genius.

Beautifully framed and silk lined behind glass in a handsome hand crafted gold basswood frame, this is a luminous and spectacular work by one of the most important and iconic American illustrators from the prime of his career.

These risque “chamber maid” images were popular long before the advent of pin up art, images have circulated since the Victorian era before the turn of the last century. Seen below is an early 1900s mutoscope card proof photo from the Exhibit Supply Company archives that dates to about 1915 – 1920. 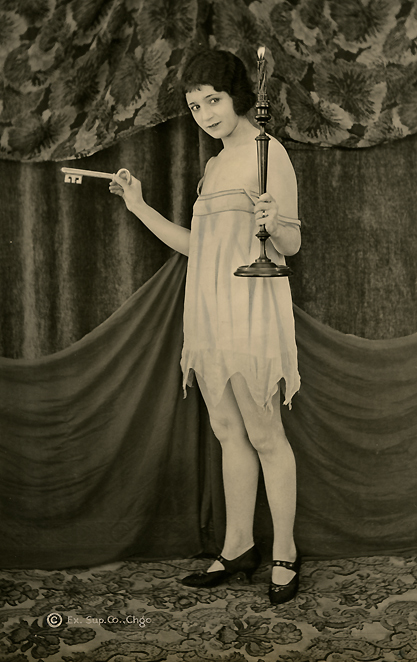 Legendary American pin up illustrator Earl Moran was one of the first to discover a muse in the iconic Hollywood legend Marilyn Monroe. During the late 1940s Monroe famously worked as a pin-up model for the Blue Book agency, posing under her real name of Norma Jeane Dougherty. During her short period sitting for photographers and artists, she became Moran’s favorite model. For Brown & Bigelow, he created a series of the then red-headed beauty in situational poses for calendars and advertising use. A photograph of Marilyn Monroe in this sexy chamber maid situational pin-up pose shot by Earl Moran exists and is shown below but the pastel was never created with Monroe as the model.